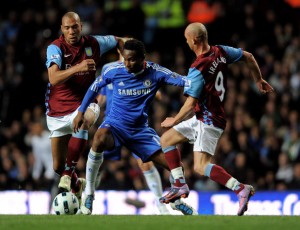 Embattled Super Eagles midfielder, John Mikel Obi appears to be enjoying a new lease of life, as he was again in coach Roberto Di Matteo’s starting line-up Saturday, as Chelsea struggled to a 1-0 win against Stoke at the Stamford Bridge.

Mikel, who had found it difficult keeping a regular first team shirt in the Blues line-up in recent times especially under sacked coach Andre Villas Boas, made his second appearance under the new gaffer, Di Matteo, as Chelsea intesify battle to at least get into the top-four on the Premier League table..

Although having been slowed down by injury for some time, the former Lyn Oslo of Norway star who is now in his 6th season at the London club having arrived in 2006, had initially featured in the 2-0 FA Cup win over Birmingham last Tuesday, playing the entire 90 minutes in Di Matteo’s first game in charge of Chelsea.

And against a stubborn Stoke City side which had to play with 10 men for the better part of the game, Mikel posted an above average performance in the heart of Chelsea midfield and was on for 67 minutes, before being substituted by Daniel Sturridge.

Mikel’s form for both club and country has been a source of concern to Nigerian fans of late, with the former youth international not getting called-up for Nigeria’s African Cup of Nations qualifier away to Rwanda where the Eagles laboured to a goalless draw in Kigali.

Super Eagles gaffer, Stephen Keshi had ostensibly left Mikel out of the national assignment, apparently to give the midfielder time to get his club form right and re-establish himself in the star-studded Chelsea side.

It remains to be seen if Di Matteo would go on keeping faith in Mikel as Chelsea looks towards overturning a 3-1 first leg defeat against Napoli, when the Italian side come calling in Tuesday’s Champions League fixture at the Stamford Bridge.