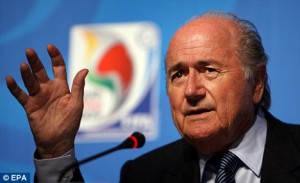 According to a report titled “Global Market Transfer in 2011” released by FIFA on Thursday, Nigerian footballers moved the most in Africa.

The FIFA report also revealed that French players were the most transferred in Europe.

The report, titled “Global Market Transfer in 2011”, also showed that 13 percent of all transfers globally involved Brazilians, with Argentina, Uruguay and Colombia also featured in the top 10.

With respect to demand, Brazilian players were the most sought after, followed by Argentine and French respectively.

According to FIFA, over $3 billion was spent in 2011 on international football transfers worldwide, with over 11,500 moves registered on its Transfer Matching System between January 1 and December 31, 2011, with peaks during the transfer windows in January, July and August.

August 31 was, however, the busiest transfer day in 2011 with 317 switches made from one country to another.

The average transfer fee across all international deals was placed at $1.5 million, while the average salary in a selection of 10 countries worldwide was $244,000.

FIFA’s Transfer Matching System became mandatory on October 1, 2010, and was used last year for the first time by all 208 FIFA member associations, as well as more than 5,000 clubs. It excludes transfers within a country.

“This report gives us a lot of useful data on football transfers, highlighting the increased transparency that the TMS has provided to the transfer market,” said TMS general manager Mark Goddard in a statement.

He added: “We aim to provide a unique set of information which should be useful on the one hand for football fans and the media but also for our member associations and club managers who require a more in-depth analysis.”