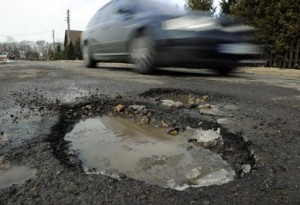 A South African academic is planning to sue the government after a pothole damaged his car and forced him to miss his mother’s funeral, the Beeld newspaper reported Monday.

University professor Wannie Carstens’s car hit a pothole and burst a tyre when travelling at around 100 kilometres (60 miles) per hour in darkness on Sunday morning in the country’s north-west.

The car was towed to a town and the tyres replaced but Carstenscould not continue to Upington, a drive of more than 600 kilometres (370 miles), due to possible further damage to the vehicle.

“My brother was upset, and my sister was in tears,” he told the newspaper.

A spokesman for the North West department of roads acknowledged that the road was in need of major repairs but said there was a lack of funds.

The House on Wednesday formally delivered articles of impeachment against President Donald Trump, ending a monthlong stalemate and triggering a Senate trial to start...
Read more

A landlord in London has been accused of race discrimination after she banned a Gambian student from renting her property because “African cooking makes...
Read more

An evangelical pastor is facing jail for abusing abuse children and adults in his congregation for over 20 years, with help from his wife. Michael...
Read more
- Advertisement -