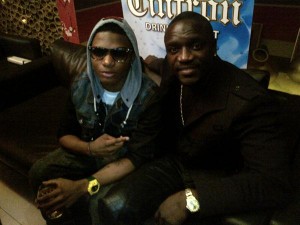 Konvict music boss and American singer, Akon has announced on Twitter that the he has signed Wizkid to his music label.

Sources from EME music say that Wizkid’s Konvict contract will run alongside his EME contract.

The duration of Wizkid’s Konvict Music contract has not been made public.

The paperwork which was signed this week is a Joint venture- partnership between EME and Konvict and will produce and release Wizkid worldwide.

“Press conferences will still be held in Nigeria and the US in the near future” EME music boss, Banky W said.

“EME will now act as Konvict’s official rep in Africa and will run the African arm of the label’s operations. This includes standard offices, management, studios, production, A&R and provision of more artistes to launch under this partnership.

“Wiz is the first act to be launched under this agreement, but provision has been made for EME and will continue to build acts that achieve enough buzz to also launch on the same platforms” Banky W added.