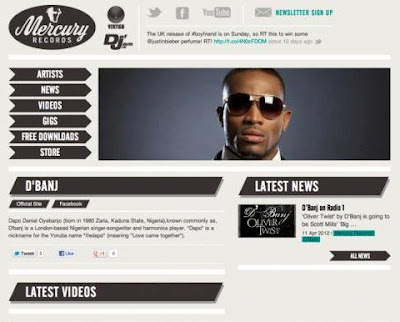 Mercury Records is a record label operating as a standalone company in the UK and as part of the The Island Def Jam Music Group in the US; both are subsidiaries ofUniversal Music Group.

Mercury Records lists D’banj on their official website as one of their acts alongside the likes of UK rock singer-songwriter Elton John, Soft Rock singer Taylor Swift Irish rock group U2, former The Beatles musician Paul McCartney and others.

Although his publicist and management are yet to respond to our E-mails concerning the signing, D’banj seems to have confirmed the news himself as he has updated the bio section profile on his Twitter page.

D’banj has also launched his personal website www.dbanjofficial.com where the Mecury Records logo boldly appears in the bottom right corner.

D’banj is however not listed on the G.O.O.D Music/Def Jam official roaster on the label’s website.

D’banj who recently parted ways with his former Mo’Hits label partner Don Jazzy has relocated to the US where he will continue to push his brand and music in the foreign music market.

The entertainer is set to officially release his smash single ‘Oliver’ (which recently made Scott Mills’ Radio 1 ‘Record Of The Week’) in the UK on May 14.

D’banj as announced earlier will also perform at the 2012 Barclaycard Wireless Festival which holds at the Hyde Park, London, on Saturday, July, 7 2012 and at the BBC Hackney Weekend 2012 in London come June 23 and 24.