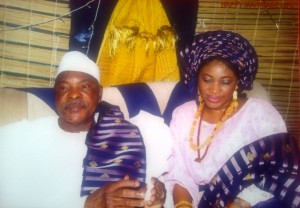 The former Governor of Kogi State, Alhaji Ibrahim Idris recently took a 13th wife in a secret wedding held at the Kogi State government house.
The event gathered personalities from across the state including the present governor (and inlaw to Ibrahim Idris) who came to witness the wedding between the 78 year old former governor and his 27 year old bride.

The bride’s name was given simply as Ramotu. She hails from Okene. Her parents reside at Lokoja while Ramotu resides in Abuja with one of her elder sisters. She posses an O’Level school leaving certificate. Prior to her meeting the former governor, she earned a living through hawking of ‘senegalese’ cloths at the Presidential villa.

The marriage event has begun to raise questions within quarters in the Kogi intelligentia. Questions over why the marriage event was held at the government house remain unanswered by the Governor’s people. It is recalled that the former governor was ousted following a Supreme Court ruling that tossed him out of the governor’s office. It is also recalled that the abrupt end to former governor Idris’ tenure led to a controversial swearing-in of the present governor by a customary court Judge – upon the instruction of ex governor Idris – against the orders given by the attorney general of the federation instructing that the State Chief Judge swear-in the Speaker of the State Assembly.

Informed observers believe that ex governor Idris determined efforts to install his in-law, Capt Wada as the Governor of Kogi anchors on the former governor’s desire to remain the de-factor governor of the State. The recent State House wedding points to this reality.