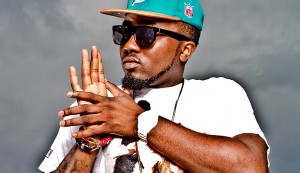 He was presented with the award at the Dome of the Accra International Conference Center after having performed for the cream of entertainers and fans with his fellow ‘Choc Boiz’ MI and Brymo. Ice also performed at the event last year. Having a good outing with his Choc Boiz fam, the rapper admitted this year’s performance was an opportunity for him to make up for his woeful 2011 performance.

Apart from Cabo Snoop, he was the only Best African Act nominee in attendance, and obviously, the only Nigerian. And sources say his win was as a result of his popularity in Ghana, thanks to his smash hits ‘Superstar’ and ‘Oleku’ which features labelmate Brymo.

‘It’s surprising, the people love Ice Prince. I think the only person they love that way right now is Flavour. It’s so amazing’ a Nigerian guest told us shortly after the show.

The shocking win now places the young rapper in a great position to further grow his profile across the continent, following in the footsteps of the likes of Psquare, 2face Idibia, Bracket, Flavour and D’banj who are bonafide bestsellers in nearly every part of the continent.

The awards, now in its thirteenth edition, also saw rapper Sarkodie walking away with three awards.