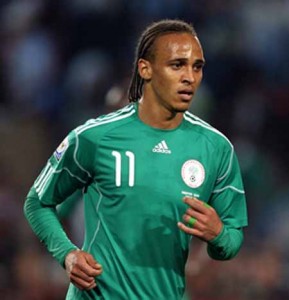 Osaze Odemwingie and his fiancée, Sarah, had initially fixed the wedding for May 19, the date of the Champions League final and one week after the close of the Premier League, but his would-be father-in-law insisted he would not attend if Manchester City survived to the end of the competition.

“We wanted to get married the week after the season ends but when we fixed the date, Manchester City were still in the Champions League and Sarah’s dad, Mike, who is a big fan, said he’s never coming if they’re in the final, which is on that Saturday,” Odemwingie told guardian.co.uk.

Osaze has now fixed his wedding for June 2, two weeks after the UEFA Champions League.

“When he was saying it, we were laughing at the table. And then Sarah looked at me and said: ‘He’s not joking.’ I was still laughing and she said: ‘I’m serious.’ So because of him we had to have it two weeks later. It was too late to change when Manchester City went out of the Champions League. And Sarah has something in her head that once a date is fixed, it has to be done then. So we left it.”

Odemwingie finds the whole episode hilarious and breaks into more laughter when he recalls Albion’s meeting with City at The Hawthorns on Boxing Day. “Sarah’s family are all Man City fans and they had to sit with the West Brom supporters but her dad couldn’t help but sing the City songs. His wife was hitting him, saying: ‘Will you stop that!’ They were looking forward to winning the game but it was a 0-0 draw so I changed my shirt with Vincent Kompany and gave it to Mike as a consolation. I said, ‘Here you are, don’t cry (about the result)’.”

He was the fifth highest Premier League scorer last term with 15 goals and although he is frustrated that ankle, knee and hamstring injuries disrupted a second season that he describes as “a little strange”, he has still managed to score nine times in the top flight at a rate of one every three appearances. Five of those goals came in February, including a hat-trick in the 5-1 victory over Wolves that has left an indelible mark on one fan.

“There was a guy who came to the training ground, he looked so bright and it was maybe two months after the game,” says Odemwingie. “He showed me a tattoo on his leg with my face and me holding up three fingers. I couldn’t say anything. I was shocked, positively shocked that it meant so much that he could go and do that. I said to Youssouf Mulumbu: ‘Youss, do you know what I just saw? I saw a tattoo of my face on someone’s leg because of that Wolves game!’”