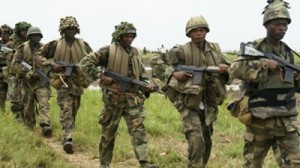 “The suspected Boko Haram Islamic sect members were killed in a shoot-out with the military.

”As soon as we got information that a bakery was attacked by suspected boko haram members where five people were shot dead, we immediately reinforced security in and around the area.

“We conducted a thorough search in the area which inconvenienced the suspected members who started shooting in a bid to escape before they were shot dead by my men.” Colonel Victor Ebhaleme, the Field Operations Officer of the JTF said.

Ebhaleme said there was no casualty on the side of the military and assured residents of their safety noting that “we are more than ever ready the crush Boko Haram.”

According to the Colonel, items recovered from those killed included “2 AK-47 riffles with 20 rounds of ammunition.”