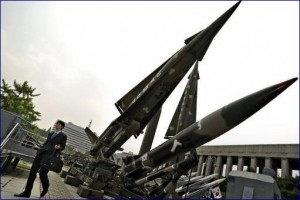 North Korea demanded Thursday that South Korea apologise for what it called insults during major anniversary festivities, or face a “sacred war”, as Seoul unveiled a new missile to deter its neighbour.

Regional tensions have risen since Pyongyang went ahead with a long-range rocket launch last Friday, defying international calls to desist.

The event was to have been a centrepiece of celebrations marking the 100th anniversary Sunday of the “Day of the Sun”, the birthday of Kim Il-Sung who founded the communist nation and the dynasty which still rules it.

But the rocket, which the North said was designed to launch a satellite, disintegrated after some two minutes of flight.

“The puppet regime of traitors must apologise immediately for their grave crime of smearing our Day of Sun festivities,” said a government statement on Pyongyang’s official news agency.

Otherwise, it said, the North Korean people and military “will release their volcanic anger and stage a sacred war of retaliation to wipe out traitors on this land”.

The North has several times demanded that the South apologise for perceived slights or face war since its longtime leader Kim Jong-Il died in December. Under his son and new leader Kim Jong-Un, it has struck a hostile tone with the South.

South Korea announced Thursday it has deployed new cruise missiles capable of destroying targets such as missile and nuclear bases anywhere in the North.

“With such capabilities, our military will sternly and thoroughly punish reckless provocations by North Korea while maintaining our firm readiness,” Major General Shin Won-Sik told reporters.

Cross-border tensions have been high since conservative President Lee Myung-Bak took office in Seoul in 2008 and scrapped a near-unconditional aid policy.

“If our power is strong, we can deter enemy provocations,” Lee said Thursday, describing the North as “the world’s most hostile force”.

The North hit back at critical comments by Lee and by conservative media, which questioned the overall cost of the celebrations in a nation suffering acute food shortages.

Lee had said the estimated $850 million cost of the launch could have bought 2.5 million tons of corn.

“Traitor Lee Myung-Bak took the lead in vituperation during the festivities,” said a joint statement by the North’s government, party and social groups.