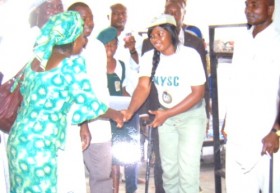 Anwana, a graduate of bio-chemistry from the University of Uyo in Akwa Ibom State, did her primary assignment with the Nigerian National Petroleum Corporation (NNPC) Deport, Minna and completed in February. She said she thought about the project after she visited a colleague who was serving in the school.

Anwana said she was motivated by the deplorable condition of learning in the school and that also motivated her to volunteer to teach chemistry after discovering that there was no chemistry teacher in the school.

The 25-year-old told Daily Trust that the initial idea was to renovate the dilapidated hostel blocks of the school but after considering many factors, she came to the conclusion that it would be better to build a new hostel to supplement the existing ones which she said were inadequate.

She said her resolve was also strengthened  by the realisation that the accommodation facility for about 1,500 students was inadequate.

According to her, after conceiving the idea, she sought the consent of the school authority and the District Head of Kafin Koro, Alhaji Abubabkar Mamman, on the project.

She said she was not only given an approval but was encouraged by the school authorities and the district head.

She explained that after articulating her plan by having the bill of quantity, she made her proposed plan known to the NYSC in the state, where she was commended for a well-conceived community development project and was reminded of the challenges of raising fund for the project.

The bio-chemistry graduate said even before arriving at a decision, she had started saving her monthly service allowances as well as the monthly pay she receives from the place of her primary assignment.

Anwana commended the Secretary of Paikoro Local Government Council for providing her with the list of prominent sons and daughters of Kafin Koro town who donated about N3.8 million for the construction of the hostel project.

She said because of her tight schedule at her place of primary assignment, she dedicated only two days in a week for the school – Friday for teaching and Sunday for project supervision.

However, while the programme was going as planned, tragedy struck when she had an accident in December while travelling on a motorcycle from Minna to Kafin Koforo to supervise the project.  She sustained multiple fractures and was admitted at the General Hospital, Kafin Koro and later referred to IBB Specialized Hospital, Minna.

Anwana said she could not remember what happened but only saw herself in hospital where she was told that she was involved in bike accident. She was bed ridden for two months and that temporarily held back the project.

After she was discharged from the hospital, the corps member continued with the project despite the fact that she needed crutches to  walk.

Going by her plans, the project that commenced in September was supposed to be completed and commissioned in December. But because of the accident, the project was delayed till March.

The hostel accommodation, furnished with 40 new double bunk beds and mattresses ,is one of the success stories of NYSC community development project in the state.

Pleased with her contribution to the community, the District Head of Kafin Koro, conferred on her the traditional title of Jakadiyar Kafin Koro (ambassador) and donated a piece of land to her.

He said the decision to honour the corps member was arrived at after due consultations with the elders of the community, hence the high presence of traditional title holders during the commissioning ceremony.

However, now that Anwana has completed her national service, she is in a dilemma, not sure of what the future holds for her because her certificates were burnt in Tunga Corpers’ Lodge during the post-election violence that erupted shortly after the presidential election last year.