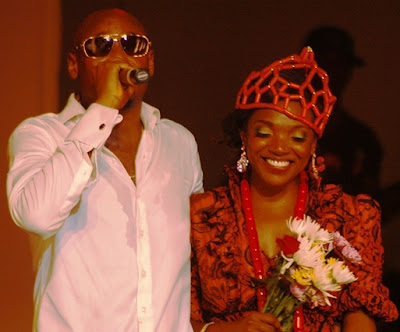 It has been confirmed that 2face Idibia got married to Annie Macaulay on Wednesday, May 2nd 2012.
The couple exchanged vows in a private registry wedding witnessed by only family members and close friends.
This was after the introduction and brideprice ceremonies held at Annie Macualay’s family house.
However, according to insiders there will be another wedding ceremony between these two which should hold all the pomp and grandeur befitting of a celebrity like Tuface later on in the year.
2face Idibia (Tuface) who has 6 children from women stunned everyone when he proposed to Annie Macaulay on Valentine’s day, weeks after it was revealed that Pero Adeniyi was pregnant with his child.