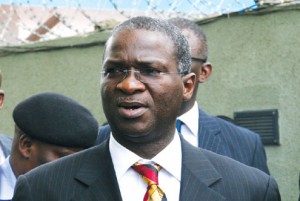 Lagos State Governor, Babatunde Fashola (SAN) has directed that none of the sacked Lagos doctors should be evicted from their quarters.

The command came on the heels of the ejection notice issued by the state Head of Service to the sacked doctors to vacate their quarters by last Friday.

Chief Medical Director of the Lagos State University Teaching Hospital, LASUTH, Professor Adewale David Oke, who disclosed this to Vanguard, weekend, said even though the eviction notice was in line with civil service rules, the governor expressly maintained that the doctors should not be evicted from their quarters.

Oke who exonerated the state government from the purported forceful eviction argued that if the doctors vacated their quarters, they did so on their own decision.

He said: “Yes, there was an eviction order but the governor has given another directive which overrides the eviction notice. The doctors should not be evicted. We already bought some padlocks to lock up the place but we could not do it because of the governor’s order. If they are no longer in their quarters, then they left on their own. We only locked up the Association of Resident Doctors’ lounge to avoid invasion of the place by intruders since there was nobody there.“

Also speaking, the state Commissioner for Health, Dr. Jide Idris, denied involvement in the eviction notice, saying it was only a procedure in civil service.

He said: “Once you are dismissed, there are standard procedures for dismissal and that is what the government is following. Now, when you are dismissed, and if you feel aggrieved, you can appeal. And if you appeal, your appeal is part of the negotiation.”

Asked if the Lagos Tenancy Law would not be applied in the case, he said: “The letter says to hand over all government properties in your possession. I am not sure that government will be that hard to say leave government quarters.  In the process of implementing, things like this may also happen. This government is not a wicked government.”

Meanwhile, the Action Congress of Nigeria (ACN) has said the Lagos State government acted responsibly and in accordance with the state’s civil/public service rules in sacking the striking doctors in its employment.

In a statement in Lagos, yesterday by its National Publicity Secretary, Alhaji Lai Mohammed, the party also accused the petulant doctors of flouting industrial laws by declaring the strike that led to their sack without issuing the necessary notice to their employers.