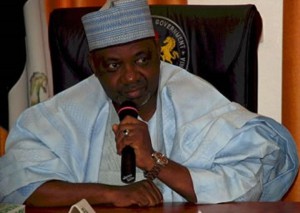 The Federal Government has renewed calls on all aggrieved groups in the country especially the Jama’atu Ahlul Sunnah Lid’dawati wal Jihad known as Boko Haram to cease fire and come forward for dialogue.

Speaking at a National Symposium, organised by Nasirul-Lahi-Fathi Society of Nigeria (NASFAT), Vice President Mohammed Namadi Sambo said the federal government is ready and willing to dialogue with the Boko Haram.

He said “government is ready to discuss. History has proven that even wars that are fought for decades, at the end, are only concluded by dialogue.”

“Islam is a religion of peace; it is a way of life. It cannot promote senseless killings and wanton destruction of property. I am not aware of any religion in the world that encourages unprovoked and relentless attack on other people.”

While commenting on the symposium with the theme “Islam and Peaceful Co-Existence in a Contemporary Multi Religious Society,” Sambo said the event will help highlight the essence of peaceful coexistence as enjoined in Islam.

He commended the organisers of the symposium, saying “it would help to educate the public on the Islamic view of peaceful co-existence and the concept of Jihad.”

Sambo said the President Goodluck Jonathan’s administration is determined to provide adequate security for lives and property of all Nigerians and foreigners resident in the country.

He also assured that the activities of militant groups would not jeopardize government desire to propel Foreign Direct Investment (FDIs).

Earlier, the President of NASFAT, Alhaji Sheriff Yussuf, stated that the symposium was to dispel the belief that the terror attacks were to impose Islam or as a mark of hatred against people of other faiths and to also engender peaceful co-existence amongst the populace.

Former minister of aviation, Femi Fani-Kayode has warned the Miyetti Allah group over its continued pronouncements on the establishment of the 'Amotekun' security outfit...
Read more
- Advertisement -