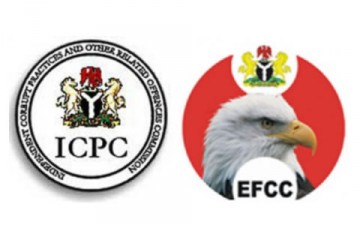 Some State governors are of the opinion that the two anti-graft agencies, the Economic and Financial Crimes Commission (EFCC) and the Independent Corrupt Practices and other related Offences Commission (ICPC) should be abolished.

“They [EFCC and ICPC] have been effectively used as political tools against those considered political enemies of any president in power.” One Governor argued.

Another State governor from the North-West while speaking to Punch News on Friday said that he supported the move, noting that many other governors are supporting the proposed move.

He said they would advise President Goodluck Jonathan to abolish the two agencies as recommended by the Stephen Oronsaye-led committee on rationalisation of federal agencies, if consulted.

A governor from the North-West said, “Our views have not been sought. But I know Nigerians would view our support for scrapping the two agencies from the position that governors are corrupt, and therefore, would not want the agencies to exist.

“But the charges against us are mere allegations. How many former governors have the two agencies convicted so far?

“Apart from the EFCC that made the arrest and prosecution of some former governors a showbiz, tell me, what has the ICPC done?

“Even the EFCC, which some would say, has done better, the majority of the prosecutions are done on the pages of newspapers.

“If the scrapping will lead to efficiency of the Police, which are primarily saddled with such responsibilities, why not (support it)?”

But another governor from the North-Central, who spoke on condition of anonymity, said that scrapping the two agencies would not serve any purpose for the governors.

He said Nigerians had been brainwashed to the extent that they “believe that all governors are corrupt and will naturally support the scrapping of the two agencies.

“So, if I say support it, they would say, don’t mind him, it is expected. They are all corrupt.

“But can Nigerians say in all honesty that these two agencies have done well, considering the amount of money that has been invested in them?

“Well, it is the duty of the Federal Government to decide either to scrap or not, after all, we were not consulted before they were created.”

Since 2007, the EFCC has taken no fewer than 18 former governors to court for corruption, money laundering and theft of public funds, two of whom had been convicted.

Those so far convicted are, Chiefs Diepriye Alamieyesiagha (Bayelsa); and Lucky Igbinedion of Edo State.

Some of these ex-governors have been exploring ways of undermining the EFCC.

Oronsaye, whose committee recommended the reduction of the existing 263 statutory agencies in the country to 161, abolition of 38 agencies among others, had said, “It was noted that the functions of EFCC and ICPC are the traditional functions of the Nigeria Police.

“The committee observed that even though the two commissions were established separately to address corruption, which the Police appeared to have failed to do, successive administrations have ironically continued to appoint the Chairman of the EFCC from the Police Force, while the methodology adopted by the ICPC in conducting investigations as well as the training of its personnel in investigation procedure is carried out by the Police.

“One wonders if it was really expedient to dismember the Nigeria Police rather than allow it to evolve as a vibrant and effective agency.”

According to him, the fact that an institution is inefficient and ineffective should not be a basis for the creation of new ones.