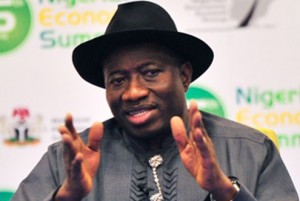 “They must be students that we politicians pushed in and I told the Minister that they must set up a committee to send the political students back to us.

We cannot allow the Universities to be taken over by political students…”, that was the order of President Goodluck Jonathan to the Education minister, Professor Ruqqayatu  el-Rufai, whilst they reviewed the running crisis in University of Abuja.

It was a rare moment of admission of the compromises the political class brings on the society. It is not only in the education sector.

Politicians of various standing and status, flaunting the powers and influence they wield on the system, often cause and even demand the compromise of the system for their own interest.

That what President Jonathan was referring to yesterday when he ordered  that students who lacked basic qualifications for admission into the University of Abuja but got in through undue influence by politicians, be expelled from the institution. He blamed that category of students for the unrest on campuses.

The University authority has thus been ordered to carry out a thorough audit of the qualification of students and consequently expel all unqualified ones.

He said those who were smuggled into the university by politicians who peddle influence often became cultists and engaged in other anti-social activities as they are unable to meet academic standards and pressures.

Jonathan spoke at the Council Chambers of the Presidential Villa, Abuja, while swearing in a Minister, Alhaji Inuwa Abdulkadir from Sokoto State who may oversee the Sports Ministry which Mallam Bolaji Abdullahi, the Minister of Youths Development, has been overseeing after the former Minister, Alhaji Yusuf Sulaiman, resigned to contest for political office last year.

The President said he has already held a meeting with requisite stakeholders in the education sector and asked them to return such “political students” to those who smuggled them into the university in the first place.

“Only yesterday (Tuesday), we had a meeting with Minister of Education. We were looking into the situation at the University of Abuja because of their crisis.

The Executive Secretary of the National Universities Commission revealed that one thing about UNIABUJA’s case is that there are students there who do not even have the basic qualification to be admitted but they are there as undergraduates.

We cannot allow the Universities to be taken over by political students who are the kind of students that create confusion, create all kinds of cults, and all kind of practices because definitely they cannot cope with the academic challenges. So to be relevant, they have to become cultists and then promote all kinds of behaviours that are anti-social so that they can to be relevant in the institution”, Jonathan stated.

Giving a charge of probity to the newly sworn in civil servants, President Jonathan said that the danger in putting wrong hands in place was that without a vibrant and effective civil service, no matter how good an office holder was, his policies will fail, adding that there were qualities like competence and loyalty which were needed in the civil service for it to be effective.

Others sworn in were the Chairperson and members of the Civil Service Commission whom he charged to ensure that less political influence was brought to bear in recruitments so that the most qualified people would man positions as a way of ensuring that good hands were put in positions for effective policy implementation.

The President regretted that most of them work at cross purposes, relying on their perceived axiom that soldier-come- soldier-go, but barracks remain, meaning that political appointees come and go while they remain which makes them not to approach their duties with enough commitment.

He said that he was sure given their resume, they were qualified and fit to handle their positions and should therefore use their experiences to correct the maladies in the system and make it effective and charged them to be committed to reversing the present ugly trend.

“We thank you for accepting to serve. We believe that you will work extra hard to bring back the glory of the service in conjunction with the Head of the Civil Service of the Federation.

Within this period, Nigerians who have one thing or the other to do with the Civil Service complained of one thing or the other. First the attitude to work, people do not go to work when they are supposed to, the quality of service, in some cases, loyalty to government and sometimes civil servants are even accused of frustrating political office holders deliberately.

“No matter how pragmatic a Minister or President is, when the civil servants that are supposed to carry out government policies do not flow with the political office holders, the country will remain stagnant.

We believe in you and your willingness to achieve that objective and sanitize the system, most especially when you will employ, employ people without bias. During political dispensation, we hear too many stories about political influences about employment of people into government.
“So we believe that you are going to create the quality of service that will position the federal civil service for development so that as a nation, we can collectively develop our people”, he submitted.

Speaking after the swearing in, Governor of Sokoto State, Aliyu Wamako agreed with the President that the greatest obstacle to development was the civil service and stressed the need for its immediate reformation and employment of qualified personnel to man them.