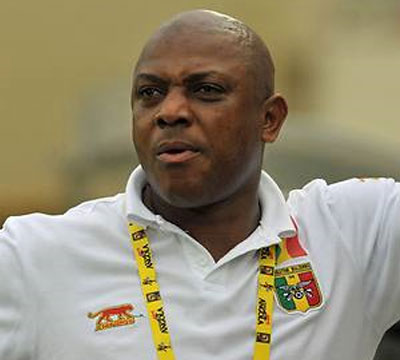 In an interview with Complete Sports, Eagles coach Stephen Keshi lamented the loss of captain Joseph Yobo to injury while stating that next month will be a very busy period for the National Team.

Keshi also added that the team is not yet as strong as it deserves.

You have been in camp for some weeks now, what has the preparation been like?

Yes, we have spent some weeks in camp and I can tell you that we have done a lot to prepare the players for the challenges ahead. But I will not tell you that we have had a solid team as many of you will expect. We are still working, and we are hoping that a friendly game like the one we are going to play against Peru will also help us to know what we have done so far and the areas we still need to improve. So the number of the months or weeks we‘ve spent in camp is not really a big problem, but what we are able to achieve within the period.

What are your expectations in the match against Peru on Wednesday?

Well, we are looking forward to a good game, a game that will help our players to improve before the qualifying matches  in June. We are not going to take it as a do or die affair. Like I told you earlier, we are going there to play our game and I have also told the players that they should not see it as a game to be under pressure of impressing anybody because we just have to do everything possible to avoid unnecessary injuries because the match in Lima is not as important as the matches we are going to play in June.

But do you think your boys can stand the pressure of the top stars that Peru invited for the encounter?

This is football and you cannot conclude the outcome of a match until it is over. They are preparing while we are also preparing for the match as well. The fact that they invited certain players for the match does not mean we will not be able to play well against them. We are going to give our best to make sure we have a good game in Lima. There is no pressure they will bring on that we will not contain and return to them.  Just as you are asking if we will be able to face their pressure, their journalists will also be asking them if they will be able to face our pressure because they are playing at home and much will be expected from them. Like I always say, we are serious with everything we do in camp and we will do our best to improve with every game we play.

What is your assessment of the team after six months in charge?

We are doing our best, but we have discovered that we still have a lot to do because we know where we are coming from, where we are at present and where we want to take the team to. For now, I will tell you that I don’t have Super Eagles, which means that we are still experimenting with the players we have invited for games so far. But we are hoping that very soon, our efforts will yield the positive result we are looking forward to. However, or now, we don’t have the kind of strong team which Nigeria deserves.

But how soon can Nigerians see a team they will be proud of?

We just have to be patient for now, but I am very sure that very soon, they will see a team they will be proud of and that is why everybody in the team is very busy. The match we are going to play in Lima should also help us to know the areas we have to improve on and I must tell you that the idea of inviting five foreign based players for the match in Lima is also to help us to know the contributions they can make to the team and who among them we can invite for more games.

You released a list of eleven foreign based players last Thursday for the matches you are going to play in June without big names like Yakubu Aiyegbeni, Mikel Obi, Osaze Odemwingie and Taye Taiwo.
What is the idea behind their exemption from the games?

There is nothing special in that. We cannot call all the players we have at the same time. Like I said earlier, these players you mentioned have been in the national team for quite some time now and we need to invite some new players, test them and see how they can help our re-building process. But the fact that these players are not invited now does not mean that they are totally out of the team. You as a journalist have the duty of educating the public that all the players cannot be invited at the same time. We still have many matches to play and you could see them there , but for now, we just want to try these young  players and see what they can contribute to the team.

Then how would you defend John Utaka’s invitation in the team?

Utaka has been quite outstanding for his team this season and no coach or  nation would want to ignore such a player . And the same thing goes to other players we invited for these games. The other time we played Rwanda, we invited some players and we want to continue with that idea until we get a quality team. After these games in June, we are still going to invite some new players. So, we did not exempt any players because we don’t want them again in the national team, no.

You invited 28 players for the three competitive games in June.  Don’t you think you are already at risk?

Yes, it is a big risk, but the fact that we are even alive today alone is a big risk because anything can happen.  But we know what is at stake and we are well prepared to face it.  I have spoken with the players and they have all assured me that they are ready to face the task and I am not expecting anything short of excellent performance from them in all the matches. Aside the foreign based players, we also have some home- based players who will be part of the team and we are sure that what they have learnt right from the first day we invited them to camp will go a long way in helping them to face the tough qualifiers we have in June.

The month of June will be very busy for both the coaches and the players.  what kind of support  are you getting from the Nigeria Football Federation ahead of the games?

Yes, the month of June is going to be a total war month for us. Immediately we return from Lima, Nigerians should know that the war has started and we are not going to allow anything to distract our attention or focus and that is why we spoke with all the players before we invited them. The issue of discipline is going to be taken seriously and I am sure that every player will keep to the rules and regulation in the camp. Fine, the FA is trying,  but we still need more because we are both working together  in the interest of the team, and I hope that at the end of the day, we will all sit down together and say we have been able to restore our football ‘s lost glory.

The team’s captain, Joseph Yobo  will not be part of the team due to injury. How do you feel about this?

I feel very sad that the leader of the team will not be there when we are going to do these battles because we have all along been planning towards the matches. And when the matches are very close, the news of his injury came. I feel very sad and pray that God gives him speedy recovery so that he can  rejoin us for the rest of the games. Definitely, we are going to miss him, but he has told us that he will be with the team in spirit and we have equally told the rest of the team to be ready for the war.

How are you going to adjust, especially when you look at the position Yobo plays in the team?

It is really difficult to say because that is one position we really don’t have problem with and we never  knew that something like injury was going to come up.  However, we have called up some players from  the home based players we have. We will make sure that we work seriously on that position so that it will not affect the team  before Yobo returns.

Many believed that you tactically exempted the ‘Big Boys’ from the team to avoid ‘Mafiarism.’ How would you react to this…

No, there is no big boy in football. You can only be a  big boy based on what you can contribute to the team.  But if you say you are a ‘big boy’ and you  have nothing positive to contribute to the team, then the decision is left for the coach to take and  in the process of rebuilding , we are carrying out in the national team, I can tell you that we are not going to allow that to happen. I have played this game to the highest level and I know the kind of commitment each player should also show to the game. Forget the issue of ‘big boys’  in the present Eagles.

Which among the teams you are playing next month do you think could give you  some difficulties?

There is no team that cannot prove difficult and no team  is small anymore. But the most important thing is how prepared are you for the games you are playing. We are going to play every game like cup finals because it is a must for Nigeria to be at the next Nations Cup and World Cup, and if we must achieve these,  it means we really need to work hard and give our best in every game we play. The truth is that football has gone beyond past glory or  names, and that is why you can see that some  nations have really improved  to a point of  being  recognized in any tournament and I don’t want to be deceived anyone that the Super Eagles are still what they were many years back. No, we just need to come out again, do the right things and get the right players for the improvement we want to see in our football. Whether Namibia, Rwanda , Kenya or any team for that matter, they are all difficult  teams, but we are going do our best to win all our matches and that is our mission and target for  now.