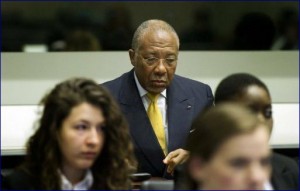 Taylor, 64, was convicted last month of all 11 counts of war crimes and crimes against humanity for aiding and abetting Sierra Leone’s Revolutionary United Front during the country’s brutal 1991-2001 civil war.

In return, he was paid in diamonds mined by slave labour in areas under control of the rebels, who murdered, raped and kept sex slaves, hacked off limbs and forced children aged under 15 to fight, the court found.

“The accused has been found responsible for aiding and abetting some of the most heinous crimes in human history,” said Special Court for Sierra Leone judge Richard Lussick, reading out the ruling on Wednesday.

“The trial chamber unanimously sentences you to a single term of imprisonment for 50 years on all counts,” the judge said at the international court based in Leidschendam, just outside The Hague.

“The trial chamber noticed that the effects of these crimes on the families and society as a whole in Sierra Leone was devastating,” he said.

It was the first sentence against a former head of state in an international court since the Nuremberg Nazi trials in 1946.

Taylor, with gold-rimmed glasses and cropped hair, a dark suit and gold tie, listened with his eyes closed as the judge handed down the sentence, which Taylor’s team, and prosecutors, have two weeks to appeal.

Chief prosecutor Brenda Hollis had asked for 80 years’ prison for Taylor, once one of west Africa’s most powerful men. Speaking after sentencing, Hollis said her team would study the judgment before deciding whether to appeal.

“The sentence today does not replace amputated limbs, does not bring back those who have been murdered or forced to become sexual slaves” or child soldiers, she said. “But it brings back some measure of justice… for those lucky enough to survive.”

In Sierra Leone’s capital Freetown, hundreds of survivors of the war that claimed 120,000 lives watched the proceedings in silence on a large TV screen.

Among them was Al Hadji Jusu Jarka, former chairman of the association of amputees, who had both his arms cut off by the rebels.

“The curtain has now been drawn on Charles Taylor,” the war survivor said. “I hope he will be haunted by his deeds as he languishes in jail.”

Human rights activist Charles Mambu called the sentence “excellent” and said: “It shows that it’s no longer business as usual.”

Taylor’s lawyer Courtenay Griffiths said the sentence meant that “effectively Charles Taylor will die in prison,” while the legal team indicated it would appeal.

Judge Lussick said 80 years would have been excessive, but that, given Taylor’s position as Liberia’s president from 1997 to 2003, he “held a position of public trust and higher authority which he abused.”

Throughout the trial, Taylor maintained his innocence and insisted he was instrumental in eventually ending Sierra Leone’s civil war.

But the judge said that, while Taylor publicly played a substantial role, “secretly he was fueling hostilities between the (rebels) and the democratically elected government of Sierra Leone”.

Therefore, “Mr Taylor’s role in the peace process is not a mitigating factor,” he found.

The ex-president will now remain in the UN’s detention unit in The Hague until his appeal procedure is finalised.

Taylor’s sentence will be served in a British prison. London’s offer in 2007 to host Taylor in custody if found guilty was part of the deal to put him on trial in the Netherlands-based court.

The nearly four-year trial, which wrapped up in March 2011, saw several high-profile witnesses testify. Among them was supermodel Naomi Campbell, who told of a gift from Taylor of “dirty diamonds” she received in 1997 at a charity ball hosted by South Africa’s then president Nelson Mandela.

Authorities in Nigeria arrested Taylor in March 2006 as he tried to flee from exile after being forced to quit Liberia three years earlier, under international pressure to end that country’s own civil war.

He was transferred to The Hague in mid-2006 amid security fears should he go on trial in Freetown.

Taylor’s sentencing came 66 years after the International Military Tribunal at Nuremberg sentenced admiral Karl Donitz to 10 years in jail for his part in Nazi crimes during World War II. Adolf Hitler had appointed Donitz his successor shortly before committing suicide in Berlin in 1945.