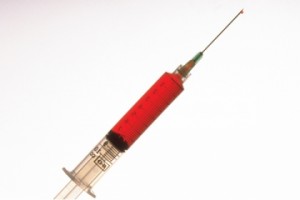 A US man has been accused of robbing a drug store, after threatening to stab the pharmacist with a syringe he claimed contained HIV-infected blood.

On April 18 at around 4:20 a.m., Police say Benjamin Blessing, 52, forced the pharmacist to open a safe containing prescriptions at the Centennial Lane CVS/Pharmacy in Ellicott City, Maryland.

With the help of Security footage, Mr. Blessing was identified as a suspect, and a search warrant allowed investigators to find the stolen drugs in his home.

Stun guns and syringes are unusual choices for a heist, but fortunately no one was hurt in either case. Police confirmed that the substance in the syringe was, in fact, blood, but are conducting tests to confirm whether or not that blood was infected with HIV, the virus that causes AIDS.

“It’s not something we’ve ever heard of here — a syringe being used as a weapon or to imply that someone’s going to do harm,” Sherry Llewellyn, spokesperson for the Howard County Police Department, said

This isn’t the first time a criminal has used this ploy. In July 2011, a Denver man robbed a cupcake bakery using a syringe he said contained his own HIV-infected blood. The owner, Carrie Bach, told the Denver Westword that the syringe was “actually more frightening than a gun” and “it was a really creepy weapon to use.”