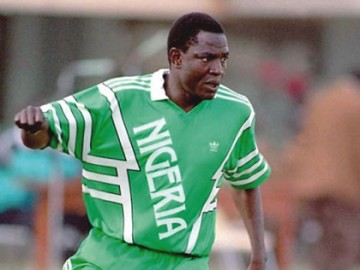 The Nigerian Football Federation (NFF) has revealed that the Under-17 football tournament would be named in honour of the Late Legendary Eagles‘ striker, Rasheed Yekini.

Yekini died on May 4 and was buried the following day.  Aged 49 years, he left behind three wives and three daughters.

Maigari also donated N500,000 to the immediate family of the Rashidi Yekini.

He also said NFF would organise an international football match in Kwara State, adding that proceeds from such a competition would go for the upkeep of Yekini’s family.

“NFF is not going to close its eyes in taking care of Yekini’s family. It is going to ensure that through the Minister of Youths and Sports, Yekini has a national honour.

“There are many more things to come.  The moment we have our executive meeting in Abuja next week, we will get back to Yekini’s family. Yekini is not a man to be forgotten in a hurry.” Alhaji Maigari said.

NFF First Vice President, Chief Mike Umeh, in an interview with journalists described the Yekini as a disciplined, obedient player and a prolific goal scorer.

He stated that the NFF tried to keep in touch with Yekini before his death but that it was not easy to communicate with him.

Similarly, the Speaker, Kwara State House of Assembly, Mr. Rasaq Atunwa, described Yekini as a footballer that brought glory to his people, Kwara State and Nigeria.

Kwara state’s sports commissioner, Kayode Towoju, said the state government would continue to encourage young talents in the state towards achieving their potentials in life, noting that Yekini did not only make the state proud throughout his football career, but also contributed to national sports development and progress.

“We will not leave the family alone.  What is necessary at the right time, we will do it.  South-West Football Association will have meeting next week and whatever the outcome of the meeting is, we will let the family know,” he said.