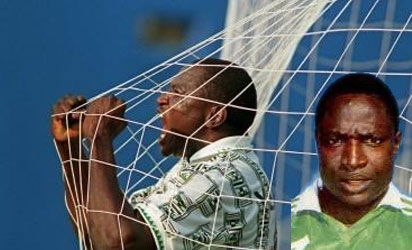 A retired Nigerian footballer, Rashidi Yekini who scored the country’s first goal at the World Cup is dead. Yekini who was born in Kaduna was said to have died in his Kwara residence.

Though, the circumstances surrounding his death were still sketchy at the time of this story, his death was reportedly confirmed by one of his colleagues, Mutiu Adepoju, who was part of the Super Eagles team that won the prestigious African Cup of Nations in 1994.

During his heydays as a footballer, he scored about 37 goals for the country in 58 appearances.

His soccer prowess especially during the 1994 FIFA World Cup when he did a yeoman’s job in  Nigeria’s defeat of Bulgaria by 3-0.

Apart from playing for his country, he featured in other international clubsides such as Cote d’ivoire where he played for Africa Sports National, Victoria Setubal in Portugal among others.

He won the best African footballer of the year in 1993.

There were conflicting stories about where he died. While some claimed he died Kwara State, some said he died in Osogbo in Osun State. He would be buried Saturday according to Muslim rites in Ilah, Kwara State in Ira.

Already, his death has been posted on the social media, facebook. He played both local and international matches.

Several calls made to one of his coaches, Onigbinde  to confirm his state were unsuccessful.

Meanwhile the Kwara Stae government has sent a condolence message to the family of the legendary footballer describing the news od his death as shocking.

In a condolence message signed by Abdulwahab Oba, CPS to the Kwara State Governor, on behalf of the governor, said, “Government received with great shock and disbelief the sudden and untimely death of one of the finest and dedicated football players Nigeria has ever produced, Rasheed Yekini.

“ During his active days, the late Yekini demonstrated uncommon skills on the field of play and commitment to the Nigeria project that he was known not only in Nigeria but  across the African continent as a great footballer.

He will surely be missed at a time when his experience is needed to move Nigeria football to the next level.  On behalf of myself, my family  and the  good people of Kwara I condole with his family and the sporting world on this loss.”

The Nigerian Football Federation spokesman, Ademola Olajire expressed profound shock, stressing that it was the saddest football news of the year and the Glass House also sympathizes with his entire family.

Joe Erico in his reaction was short of words as he could not hold his grief . He said he would be remembered for his hard work and team spirit.

On his part, Christian Chukwu said he would remember him for his goal at the 1994 World Cup.