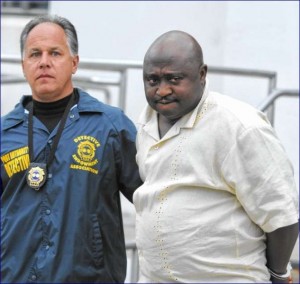 US investigators are currently looking at how a Nigerian man identified as Bimbo Olumuyiwa Oyewole successfully eluded the New Jersey Police, US customs and Border Protection and his employers for 20 years, after stealing the identity of a murdered US citizen.

He was arrested at his home in Elizabeth, New Jersey., Monday morning after an anonymous tip to the Port Authority several weeks ago lead to an investigation.

At his appearance in court in Essex County on Tuesday, Oyewole, pleaded not gulity to a 1-count charge of identity theft and he is being held on $250,000 bail.

Oyewole in 1989 immigrated illegally to the U.S. before finding work at an airport serving both New Jersey and New York.

According to the airport authorities, Oyewole started working at the Newark Airport in 1992 under the name Jerry Thomas.

Investigators are considering whether Oyewole had anything to do with Thomas’ death and if he was involved in criminal activity at the airport.

The NYPD is checking his fingerprints to see if they match those at the scene of Thomas’ unsolved murder.

“In this case, the defendant [Oyewole] utilized an elaborate and complex scheme of identity theft to defraud his employer, the State of New Jersey, the federal government and the Port Authority,” Port Authority of New York and New Jersey Inspector General Robert Van Etten said.

Oyewole worked at the airport under several contractors, most recently for FJC Security Services, starting in 2003, where he supervised about 30 guards.

When he was an employee at FJC Security Services, the firm reviewed both his birth certificate and social security card.

“During his time with FJC, he had nothing in his record or his performance to indicate a cause for concern, or a reason to question the State Police and federal government’s background checks,” said FJC spokesman Michael McKeon in A statement.

The New Jersey State Police and the U.S. Customs and Border Protection also vetted him.

A statement issued by the Homeland Security Transportation Security Subcommittee of the US House of Representatives Tuesday said a hearing on airport security breaches would hold on Wednesday (today).

Though the statement did not make reference to the arrest of Oyewole, it however said the hearing would be on, “Access Control Point Breaches at Our Nations’s Airports: Anomalies or Systemic Failures?”

“They need to use fingerprints. They need to use eye retinas. We need to get into the space age and update our programs because these things aren’t working.” The traveller added.

Big Brother Naija season 4 ex-housemates, Diane Russet looked drop-dead gorgeous as she stepped out for an event on Sunday. The reality star was one...
Read more

Popular social media commentator, Reno Omokri has stated that it is not just a sin but stupidity for anybody's pride to be bigger than...
Read more
- Advertisement -