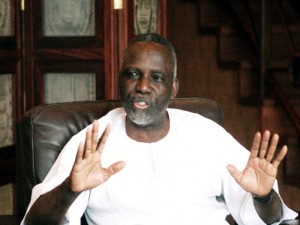 The Minister of Power, Prof. Barth Nnaji, while speaking at the Ministerial Platform organised by the Ministry of Information on Tuesday said that the Federal Government was working hard to increase power supply in the country to about 40,000 megawatts by 2020 and about 135,000MW by 2030.

The Ministerial platform was organized as part of activities commemorating the National Democracy Day and the first anniversary of President Jonathan’s administration.

The minister, who assured that government was committed to increasing power generation, said no cabal would defeat government’s plan of providing adequate supply of electricity to Nigerians.

“We have not delivered on electricity, because we are yet to have stable power supply.

“We did not have adequate plans in place. We acknowledge that in many homes there is no power. But we are working hard to improve that. Our goal is to have Nigerians have power continuously for 24 hours. There were serious mistakes in the past.

“But, now we must begin to put the correct things in place. We made the mistake of making it look as if power supply was to be delivered by government alone. But, we have now set up a framework for all stakeholders to be involved in delivering power. Therefore, we hope to deliver additional 1,500MW of power to the grid by year end.

“I totally understand the feelings of Nigerians. Even I get frustrated. We don’t want to be telling stories. We want change. I can assure you that at the end of the year, based on promises from the petroleum ministry for adequate supply of gas, we would be able to add 1,500MW to the national grid,” Prof. Nnaji stated.

The power minister explained that with the emergency declared in gas supply chain, power generation would grow by next month and finally result in an additional 1500MW by the end of the year.

He added that efforts at improving the power sector have not yielded the required results due to the N400 billion debt by the Power Holding Company of Nigeria (PHCN) to various creditors, as well as N24billion owed the multinational oil and gas companies for gas supplied for National Independent Power Projects.