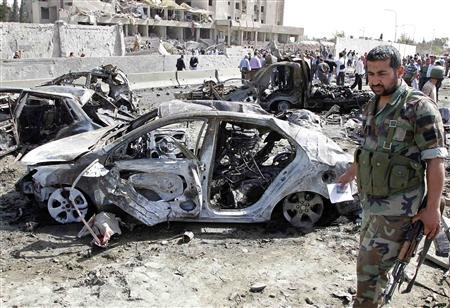 This comes as the deadliest attacks in the Syrian capital since an uprising against President Bashar al-Assad began 14 months ago.

Bloodied corpses and body parts could be seen on the road.

The Syrian Interior ministry said that the bombers used more than 1,000 kilograms of explosives in their vehicles. 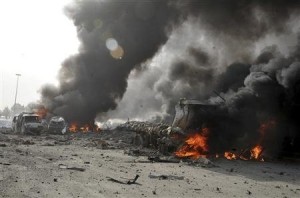 Although no group has claimed responsibility for Thursday’s blasts, the Syrian government and the opposition blamed each other. Both sides are supposed to observe a ceasefire monitored by a UN team.

However violence has continued unabated across the country, with the restive city of Homs shelled again overnight.

The international peace envoy on Syria, Kofi Annan, said the Damascus blasts were “abhorrent” and counter-productive for all parties.

Meanwhile the Syrian Observatory for Human Rights monitoring group said the toll was 59, and included civilians and regime forces.

“The toll has risen to 59 killed and hundreds of injured,” the Britain-based monitor said.

State television aired gruesome footage of the aftermath of the explosions, which rocked Qazzaz district during the morning rush hour, while blaming the attacks on “terrorists.”