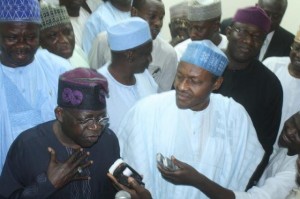 Reports indicate that the high power meeting between the party stalwarts is geared towards working out a CPC-ACN merger ahead of 2015 general elections.

“Certainly, we are likely to see a formidable opposition in 2015”, General Buhari  said while speaking to Journalists after the meeting.

Tinubu played down Buhari’s use of the phrase ‘formidable oppositon’ saying;

“Not opposition. I hate to interrupt. We hope to see a positive change in 2015 and not opposition.  We don’t want to be perpetually in opposition. Every politician wants an opportunity to govern.” Tinubu said.

On the state of the nation, Tinubu said: “I am not going to be specific. We talked about national patriotism and the direction the country is going and the need for a change, and that change might be about us having a government of our own after 13 years of democracy.

“We have areas that, even if we are not in the same political party, we can collaborate. We will not be able to face this country straight and talk to the cameras and look at Nigerians as a people and give a reason whatsoever why we have not been able to promote the course of free and fair election and rule of law in the country.

“That is very critical to our national development and goal because that is the area in which we can conquer poverty and fight for so many things. That is very necessary for the developmental aspiration of pour people. That is what we should be concerned about. It is not all about the politics, but all the progress and collaborative efforts that will result in a free and fair election in this country.”

He added that his presence at the general’s house was just a visit. Tinubu stated: “This is a return visit to the general who paid us a courtesy call in Lagos, particularly myself. And, as politicians, we discuss generally the situation in the country and how we can help to ameliorate the situation and help solve the problem.

“I will allow you to make your wise judgment about that. I am a politician and not a magician. I will rather allow you to wait until the pigeon is out of the hat.

“That is very good. I told you at the beginning that the doors were left open. We are not part of any secret about it and politics is not a dark-room event. It is openness, transparency, and the ability to work with one another and set a common agenda, and that is the purpose. We are still looking for areas where we can help our nation.

“As you know, patriotism is putting the national interest above self. If we have security agencies that are charged with the security of this country at the expense of their lives, then, the leaders must be able to make sacrifices and be flexible enough and accommodate and help redirect. It is not just anybody who can steer the ship of a nation, but it takes exceptional leadership to steer the course of things to a proper destination.”