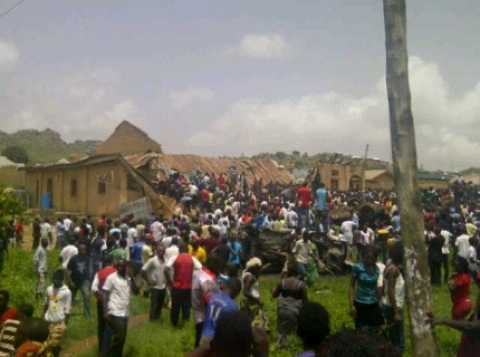 The bomb blast occurred around 11am.

At least four people reportedly died in the attack, many others are seriously injured. The number of casualties is expected to rise.

Local police spokesman Abuh Emmanuel confirmed the attack at the Jos church, but declined to give any details on the bombing.

The suicide bomber drove the bomb laden vehicle into the church premises before detonating the bomb.

Mark Lipdo of a Christian advocacy group, the Stefanos Foundation, said people were injured by the blast.

The bombed church is adjacent to various churches and a few minutes away from one of Maxwell Khobe barracks, on of the largest army barracks in the city.

Meanwhile the Associated Press (AP) reports that unidentified gunmen opened fire at EYN church in Biu, Borno state. An usher at the church was killed while others were injured, Rev. Samson Bukar, a local Christian leader said.

“Gunmen came to the premises of the church and started firing at people outside the church before going into the main building to carry on their killings” a witness said.

Just last Sunday, a suicide bomber attacked some churches in Bauchi state killing 12 people and injuring about 35 others.

No group has yet claimed responsibility for the attacks. Boko Haram is widely suspected.