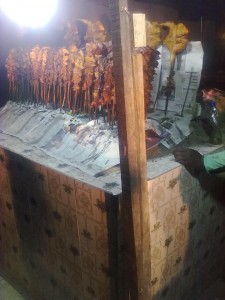 The tension surrounding the recent activities of the Boko Haram took another dimension with the news of the plans to poison Southerner with suya by the sect. While this allegation is not confirmed, it serves to show the height to which the Boko Haram crisis is capable of getting to. A war might already be upon us without us knowing it; because it is one sided at the moment.

Or how does one explain the mobilization of over five thousand individuals to parts of the country for the sole purpose of food poisoning. To think of the fact that suya is one of the least kind of delicacies that we get from the northern part of the country.

When one considers the fact that more important food items such as beans, groundnut, and maize – important because they are associated with the majority – are also brought from the North in large quantities, then the impact of such allegations (if true) can only be imagined.

The Boko Haram have been able to prove beyond reasonable doubt that they are capable of carrying out threats that they have been making. We only hope that those in the position to deal with the situation find a peaceful and lasting solution to the problem.