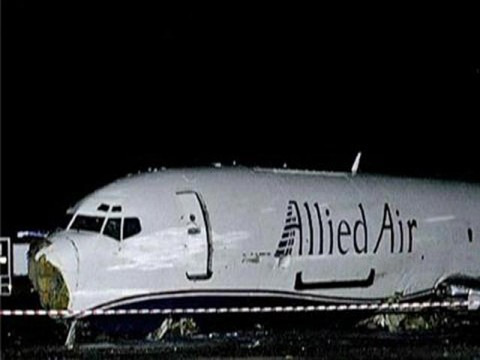 A cargo plane crash-landed on Saturday near the airport in Ghana’s capital Accra after overshooting the runway and hit a bus on the ground, killing at least 10 people, but the crew survived, officials said.

The plane had arrived from Lagos, Nigeria, when it attempted to land in Accra.

Ghana’s airport operator confirmed in a statement that “flight number DHV 111, cargo aircraft, operating from Lagos to Accra, has overshot the runway on landing on Saturday June 2, at 7:10 pm local time.”

It added that “the crew of four people on board all survived the accident and are currently receiving treatment at the airport clinic. The aircraft collided with a minivan, resulting in 10 confirmed fatalities …”

One witness reported seeing the plane come down and hit the bus, killing those inside.

“I closed from work, walking home in the rain, only to see the plane falling and people in the Benz bus crushed to death,” said Kofi Anor.

A senior military officer said the plane crash-landed and also spoke of 10 dead.

The bus was severely damaged, while the plane’s wings and tail had broken off from its body.

The bodies of those killed were taken to a morgue at a nearby military hospital where a small crowd had begun to gather trying to identify the dead, an AFP reporter said.

Some at the morgue cried out, fearing that their relatives were among those killed, but they declined to talk to reporters.

The plane crashed in an area just outside a stadium, near the airport and a military base. It did not appear to strike any houses, and scores of people gathered in the area seeking to get a view of the crash.

Ghana’s Vice President John Dramani Mahama told reporters at the airport that a thorough investigation would be carried out.

“No early conclusions should be drawn,” he said before heading toward the scene of the accident.

“We should allow investigations to arrive at the actual cause of the accident. But I can assure Ghanaians that the situation is under control.”

Someone who answered at a number listed for Allied Air in the Nigerian oil hub of Port Harcourt identified the company as Nigerian owned but said only officials at the Lagos office could comment on the crash.

Repeated calls to the company’s other listed numbers went unanswered.