The ceremony held yearly in honour of the late military Head of State, Gen. Sani Abacha, coincided with Sanusi’s turbaning as Dan Majen Kano by the Emir of Kano, Alhaji Ado Bayero, in his palace. Sanusi’s ceremony ended up taking the shine off Abacha’s remembrance, as its has shown to be less scintillating compared to few years after the Military head of state died when there was usually a grand ceremony to honor his memory. As at the last ceremony it was simply reduced to sober gathering and the Central Bank’s Governor’s Turbaning took the star to the sky.

This could have accounted for the reason why the Abacha family did not make objection over the ‘drowning’ of the traditional installation of Sanusi.

However, security was tight in Kano metropolis on the day; both regular and mobile policemen were at strategic points on all major roads. 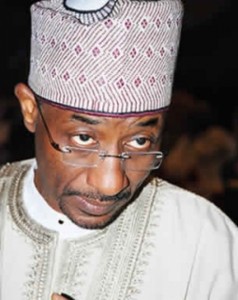