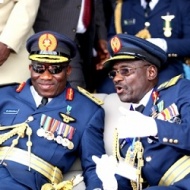 Nigerians complained bitterly about the insensitivity of the presidency in the decision to embark on a foreign trip despite the crisis going on in the country. However, having returned from his trip, President Goodluck Jonathan has begun to take ‘actions’ concerning the situation on ground.

National Security Adviser to the president, Andrew Owoye Azazi, and the defence minister, Bello Mohammed were both sacked immediately President Goodluck Jonathan returned from his trip to Brazil.

The interesting twist to this development is the fact that Andrew Azazi is the man who recently, damning any possible harsh consequences, summoned the courage to accuse Jonathan and PDP elders as being responsible for the Boko Haram crisis that has been rocking the Nation. Having said that, one would expect Azazi to, damning further consequences, bare it all; and prove his point, at least the damage had already been done in making the statement.

However, now that he has been shown the door, Nigerians cannot wait to hear the full story which Azazi has chosen to keep away from them. Meanwhile Ret. Colonel Sambo Dasuki, a cousin to the Emir of Sokoto has been appointed as the new security adviser. The post of defence minister remains vacant for now. With Sokoto being one of the few Northern states that has so far remained relativelypeaceful, in spite of the Boko Haram insurgences, we hope Dasuki will be able to advise the president appropriately in order to achieve peace and security for the entire Nation. Welcome back, Mr. Presindent. However, do not forget that there is a summons from the House of Representatives awaiting your attention as the chief Security Officer of the Nation.