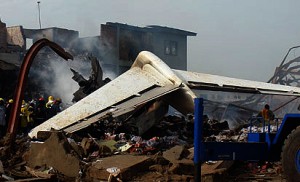 Before the close of its session on Thursday, the House of Representatives ordered that the authorities of the Dana airline company pay up at least 30% of the compensation due to the families of the victims of the ill-fated plane which crashed in Iju-Ishaga, Lagos on the 3rd of June 2012.

This resolution was reached after the motion was raised by Honorable Yakub Abiodun under “Matters of National Importance”. Mr Abiodun buttressed his motion with the Nigerian Civil Aviation Act which, according to him, stipulates that 30 per cent of due compensation be paid to families of airborne crash victims within 30 days, while investigation into the cause of such accidents lasts.

The lawmakers have therefore asked officials of the airline to act in accordance with the Montreal Protocol which stipulates that 30% of the amount of the compensation be paid to families of crash victims, so they can arrange for their burials while investigation on the matter of the crash were still ongoing.

The Montreal Protocol is a product of the Convention for the Unification of Certain Rules for International Carriage by Air, simply known as the Montreal Convention, adopted by member states of the International Civil Aviation Organisation, ICAO, in 1999. It stipulates a Special Drawing Rights (SDR) for victims of air crashes, the current value of which is put at about $171,000 per passenger.