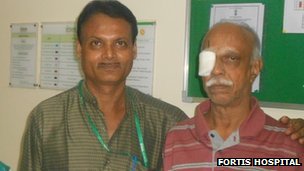 Doctors in the Indian city of Mumbai have extracted a 12.5cm-long live worm from a patient’s eye.

PK Krishnamurthy, 75, felt “itching and irritation” in his right eye, but could scarcely have dreamed of the cause.

When doctors at Fortis hospital examined him, they found the worm and removed it. He is now feeling better.

The case was “extremely unusual” and he was lucky the worm had not ended up in his brain, the hospital’s medical director, Dr S Narayani, told the BBC.

She said the worm had been sent to a microbiology laboratory for further tests.

“Such cases are not unknown but they are unusual for their rarity.

“Somehow the worm gets into the bloodstream and grows inside the human body,” Dr Narayani said. 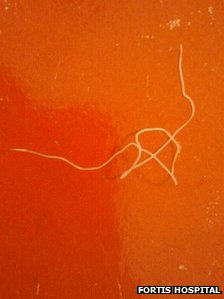 It is not clear how the worm entered Mr Krishnamurthy.

He said: “Doctors initially gave me some medicine but it did not work.”

Then he approached Dr V Seetharaman, an eye specialist at Fortis hospital, who removed the worm during minor surgery.

His symptoms have now disappeared, he confirms.

But it appears he was lucky the worm travelled only as far as his eye.

If it had not been removed it could have entered the patient’s brain and caused major neurological problems, Dr Seetharaman told reporters.