According to the authorities, a Texas father caught a man sexually assaulting his 4-year-old daughter and punched him in the head repeatedly, killing him.

The event was said to have happened during a social gathering while others were tending to horses, and the girl was left inside the family house. The father returned to the house, caught the man in the act, and stopped him by striking him in the head several times. The man was pronounced dead on the scene, while the daughter was taken to a local hospital in Victoria, Texas, for examinations before being released. Lavaca County Sheriff Micah Harmon said.

The event was said to have happened on Saturday and Harmon described the girl as “OK besides the obvious mental trauma.”

Asked whether they would press charges against the father, the sheriff responded, “You have a right to defend your daughter. He acted in defense of his third person. Once the investigation is completed we will submit it to the district attorney who then submits it to the grand jury, who will decide if they will indict him.”
Harmon described the dad as “very remorseful,” adding that he didn’t know the man was going to die.
Authorities were withholding the deceased man’s name while they notified next of kin. Officials did not know immediately if he has a prior criminal history. 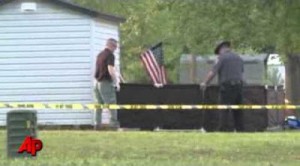