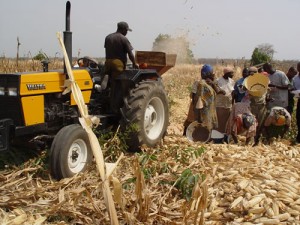 The federal government has revealed that it plans to create 3.5 million jobs in the nation’s Agricultural sector adding that it has set a local food production target of 20 million metric tonnes by 2015.

This was made known on Tuesday by the Minister of Agriculture, Dr Akinwumi Adesina during his speech at the launch of the Growth Enhancement Support Scheme on Fertiliser and Seeds in Owodi-Ede, Osun State.

“This will create 3.5 million jobs in the agricultural sector”, Dr. Adesina said, referring to the 20 million metric tonnes food production target by 2015.

“Our economy in Nigeria is actually growing very well;  we are growing at seven per cent every year but not able to create jobs enough for our youths that are entering the labour market,’’  he said.

Adesina said that Jonathan’s  administration was committed to ensuring  that the country “ produces what we eat and processes what we eat.’’

“Our population is 167 million, but we are using that population to create market for people in other countries, this has  to be discontinued,’’ he said.

The minister said that government was also committed to improving the condition of farmers across the country so that its agricultural programme could boost food production.

“We have completed an agro  input centre in Adanna and Idi iroko, an agro industrial centre at Ilesa and  new silos that will take 25,000 metric tonnes of grains in Ilesa, all in Osun,’’ he said.

The minister said the Federal Government would  provide two large scale rice mills that could process 30,000 metric tonnes of rice each annually in the state as part of measures to be self-sufficient in rice production.

“Government will provide one large scale cassava plant that can process 72,000 metric tonnes of high quality cassava flour and  192,000 new varieties of cocoa will soon be distributed to farmers, the new varieties can give 2.5 tones per hectare,” he said.

On availability of fertiliser to farmers, the minister said that it would no more be business as usual in the distribution of the commodity.

He said that only 11 per cent of farmers got fertiliser that government buys and distributes, adding that fertiliser companies would now sell directly to farmers.