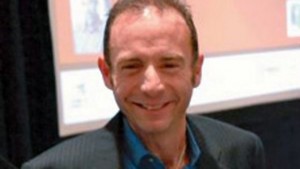 The fact that Timothy Brown is a reasonably healthy 46-year-old is no small thing. Only a few years ago, he had AIDS.

Brown is the only person in the world to be cured of AIDS, the result of a transplant of blood stem cells he received to treat leukemia.

“My case is the proof in concept that HIV can be cured,” he said.

Brown got lucky. The blood stem cells he received came from a donor with a special genetic mutation that made him resistant to HIV. The genetic mutation occurs in less than 1 percent of Caucasians, and far less frequently in people of other races. Before Brown got his transplant in 2007, doctors tested nearly 70 donors for this genetic mutation before they found one who was a match.

But doctors hope that a similar solution could help other people with HIV: umbilical cord blood transplants.

Dr. Lawrence Petz, medical director of StemCyte, an umbilical cord blood bank, said although Brown was cured by his transplant, the process was complicated because the blood stem cells came from an adult donor.

“When you do that you have to have a very close match between donor and recipient,” Petz said. “With umbilical cord blood, we don’t need such a close match. It’s far easier to find donor matches.”

But it’s still not that easy. Petz and his colleagues have tested 17,000 samples of cord blood so far, and found just 102 that have the genetic HIV-resistant mutation. The team performed the first cord blood transplant on an HIV-infected patient a few weeks ago, and they have another transplant planned for a similar patient in Madrid, Spain, later this year. It will still be months before researchers can tell if the transplants have any effect on the patients’ HIV.

Petz also noted that transplants aren’t performed solely to treat AIDS. Patients who get them have an additional condition that requires a blood stem cell transplant. Curing their AIDS would be an incredible bonus.

Brown had his transplant in February 2007. Today, his body shows no signs of the virus.

Brown said he feels guilty being the only person to have been cured of the virus when millions still live with it. But he hopes his story will inspire others that a cure is possible.

“I don’t want to be the only person in the world cured of HIV. I want a cure for everyone,” he said.