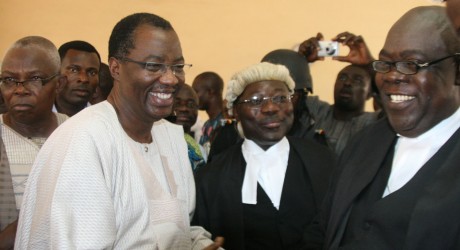 The immediate past Governor of Ogun State, Gbenga Daniel, has made good a threat he made shortly after a case against him by the EFCC was thrown out of court. Gbenga Daniel has sued his successor, Ibikunle Amosun, and some of his aides before an Ogun State High Court sitting in Abeokuta for alleged defamation of character.

Daniel’s pleas are contained in two separate suits filed by his counsel, Dr. Ope Banwo on his behalf and on behalf of some of his former commissioners. The claimants in the suit are Daniel, Mr. Sina Kawonise (Publisher of Compass Newspaper), Mrs. Toni Soboyejo, Dr. Isiaq Kunle Salako, Mr. Raheem Ajayi, Mr. Ifekayode Akinbode and Mr. Deji Kalejaiye; and the respondents are Governor Amosun, Commissioner for Information, Yusuf Olaniyonu and Commissioner for Finance, Kemi Adeosun.

In the suit, Daniel and his fellow claimants are seeking for an award of N500million in damages against the defendants for what is described as ‘persistent character assassination’. The allegations include defamatory statements against Daniel and members of his cabinet credited to Governor Ibikunle and his commissioners to the effect that members of Daniel’s former cabinet were corrupt and fraudulent.

According to Daniel’s counsel, “the suit was borne out of the need to seek redress in the court of law as it concerns the persistent character assassination of my client, Gbenga Daniel. At the end of the day, we hope that the judiciary will do justice to the suit that has been brought before it.”