The Ghanian player, and former Leicester City player John Paintsil on Monday afternoon experienced an embarrassing moment when he failed to get the engine of his flashy Hummer car started in a crowded market in Kumasi.

The player was in the car, registered JP 4-09, with his male friend in the passenger seat and two gorgeous ladies at the back. Paintsil tried starting the engine of the car, but he somewhat got some figures wrong, resulting in the complex car’s engine being jammed.

The embarrassing incident occurred right in front of Melcom Stores at Adum, the commercial nerve center of Kumasi at 1:00pm. Hundreds of people that were trading at the area left their products and rushed to the scene to catch a glimpse of the ‘disaster’ that had befallen the national star.

The huge crowd at the scene caused vehicular traffic which affected business in the city on the day. Paintsil was among the football stars and musicians that had stormed Kumasi the previous day to play a charity game at the Baba Yara stadium.

The soccer stars and musicians had visited the Melcom Stores at Adum as part of activities marking the charity game. Sources at the scene told DAILY GUIDE SPORTS that they saw a different person driving the car when the stars arrived.

According to them, when news got round town that the stars had visited the area, several people quickly besieged the place to see them.

An eye witness said perhaps the player wanted to show off, hence his decision to drive the car this time around. However, Paintsil, who was evidently uncomfortable behind the wheels, committed a blunder and got the car locked up.

Unfortunately, since the player’s car was parked just right in the middle of a busy road, its inability to move caused massive vehicular traffic in the area. Paintsil, who was seen sweating profusely behind the wheels, tried several times to get the car’s engine started but to no avail.

In the end, it took the intervention of some people at the scene who volunteered to push the heavy car to shoulder of the road.

Whilst some of the curious people that thronged the place tried to offer a helping hand to the distraught player, others who sounded envious of the flashy cars on parade by the stars were seen casting insinuations on Paintsil.

They argued that from all indications Paintsil did not know how to drive the car but he tried doing so when he saw the huge crowd, but committed a mistake in the end.

Later on, Togolese international Emmanuel Adebayor, who was part of the team, left his car and came to the scene, perhaps to console Paintsil who was still seated in the Hummer car.

Adebayor then took Paintsil, his male friend and the two beautiful ladies to his (Adebayor) car and they sped off. 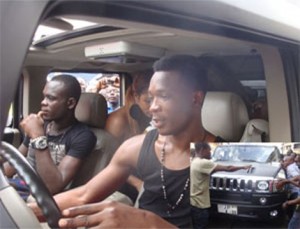