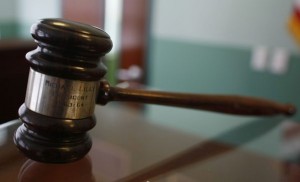 The trial of Akolade Arowolo, accused of murdering his banker wife, Titilayo, was stalled on Tuesday after he slumped in the dock at an Ikeja High Court, Lagos.

Arowolo suddenly collapsed inside the dock and was revived by the prisons officials who brought him to court.

The accused was immediately taken outside the court room by the prisons officials to take his drugs.

Arowolo was charged for allegedly stabbing his wife to death on June, 24, 2011 at their residence located at No. 8, Akindeinde St., Isolo, Lagos.

He had pleaded not guilty to the one-count charge of murder and was remanded in Ikoyi Prisons.

Ajie, who is of the Homicide Department, State CID, Panti, Yaba, and Cletus, an officer attached to the Aswani Police Station, claimed that the confessional statements made by Arowolo were made voluntarily.

Ajie claimed that Arowolo had a deep cut on his palm and belly when he was brought to State CID, adding that he took him to Police Hospital in Falomo for treatment.

He said: “On July 5, 2012, I was instructed by the deputy commissioner of police to take the accused to Prof. John Obafunwa, a Chief Pathologist, Lagos State University Teaching Hospital (LASUTH), Ikeja.

“Prof. Obafunwa took time to measure all the injuries in his body. That was all I understood from what they were doing”.

Under cross-examination by the accused counsel, Mr Olarewaju Ajanaku, Ajie said the police were convinced based on investigations that the deceased was murdered by her husband.

“From the evidence we gathered, we discovered that the couple were always fighting and I maintain that Arowolo murdered his wife”, Ajie said.

In his testimony, Cletus said Arowolo’s father, Mr Mudasuru Arowolo, came to report the incident at the Aswani Police Station on June 25,2012.

Cletus said: “We immediately went to the house and saw a crowd, including the relatives of the deceased. When I entered their bedroom, I saw Titilayo’s corpse on the bed in a pool of blood.

“There was a knife soaked with blood on the right side of her body. The bedding and the pillow cases were soaked in blood. There was a deep cut near her right breast and her right eye was stabbed”, he added.

The witness said Arowolo was taken to the police station by relatives on June 26, adding that he took his statements before the case file was transferred to the State CID.