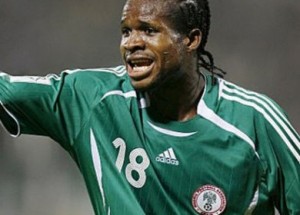 The Delta State Government while condemning the kidnap of ex Eagles player Christian Obodo, says it is making frantic effort to secure Obodo’s release, but the State’s Football Association has criticized the footballers lifestyle.

Timi said that Obodo had gone to a night club Friday night in a customized car that had “Obodo 5” as number plate and had spent a lot of money to entertain his friends.

“Contacts are being made and every hand is on deck to ensure his release,” Timi said, adding “but we have advised players to inform us when they are on holiday so that we can provide security and also advise them on their life style. Obodo showed off which was not necessary going by the mood of the nation after the Dana plane crash and even security issues in the country.“

“This is in no way trying to cast aspersions or condemn Obodo as a person. But some life styles attract these kidnappers. It was possible they trailed him from the night club to when he retired and picked him up. Security men are, however, doing everything possible to ensure his release. Contacts have been made and work is going on to free him.”