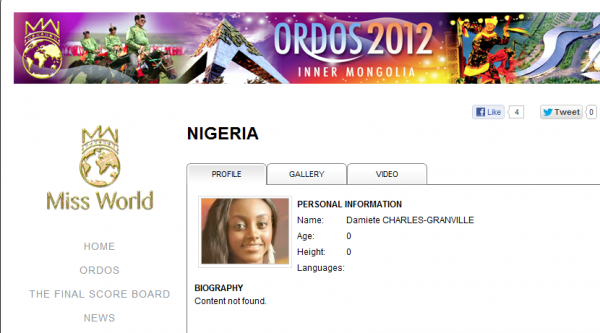 It is customary for the host to announce at the grand finale of the annual Most Beautiful Girl in Nigeria (MBGN) pageant that ” the decision of whom to send as Nigeria’s representative to any international pageant rests on the management of the organiser, the Silverbird Group.”

Given this statement, the story making the rounds that the current MBGN, Miss Isabella Ayuk was disqualified from participating at the finals of the Miss World beauty contest, holding in Mongolia, China, has been described as ‘ untrue.’

According to the Vice-President, Silverbird Group, Mr Guy Murray-Bruce “the rumour is not only untrue, but also, the handiwork of rumour mongers.”

Isabella Ayuk is still the Most Beautiful Girl in Nigeria and at no point did we dethrone her. Isabella remains the winner of the MBGN 2012 and accordingly is expected to carry out her duties as queen until next year when another queen is chosen”

“Although she will not be vying for the Miss World title, she will be contesting for the Miss Universe crown, while MBGN Second Runner up, Miss Ifeoma Umeokeke will be at the Miss Tourism International holding later in the year in China.

The decision to swap her role with that of the first runners-up was taken by the organsiser and it was taken in the collective interest of the company and the country”, Mr Bruce affirmed.

Still speaking on the issue, Mr Murray Bruce said “As we celebrate our 25th anniversary in the world of beauty pageantry, Its our wish not to only raise the bar but replicate the groundbreaking records achieved by Agbani Darego as the first Black Africa’s Miss World 2001 as well as some past queens who have achieved remarkable results at some renowned international pageants in the recent past”.

“While we seek your understanding, we also urge you to pray for their victory at the various global beauty pageants where they will be flying the country’s flag” Mr added. The media came during week with the news that Isabella Ayuk who was crowned MBGN in Benin, May, 2012 had been dropped from vying for the Miss World crown on the ground of age falsification.

According to the story, Silverbird, the organiser of the longest running beauty pageant in Nigeria had replaced the queen with her second runners up for fear of the queen being disqualified at the finals for exceeding the age limit of 26.