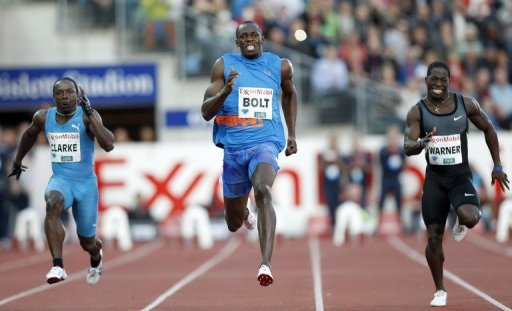 Usain Bolt scorched to his third 100m victory on his European touras part of his warm-up for the Jamaican Olympic trials, but was left bemoaning a change to the starting blocks which he says slows him down.

Bolt, who stands 1.96m (6’5″) tall and boasts a whopping UK size 13 shoe size, said his feet were just too big for the altered blocks, provided at all Diamond League meets and next summer’s Olympics by Swiss timing company Omega.

That said, it did not stop him reeling back in compatriot Asafa Powell in the last 20 metres of the race, winning in 9.79 seconds.

The reigning double Olympic sprint champion also played down his having to graft for victory against Powell, who clocked 9.85sec, his 77th sub-10sec time.

“It’s good for someone to push me and I can show I still got it, I normally come from the back to win.”

Bolt added: “When I came out of the blocks, I reacted good, but the execution from the blocks to 30 metres was not good because I was not comfortable.

“Asafa got into his running way quicker than me and got the top speed.

“I had to work a little harder to get into my stride, but the good thing is I’ve still got it and I passed him, so I’m happy.

“I need to get consistency in my race. My start is letting me down slightly, but overall it was okay and I’m on the right track for the Olympics.

“I’m not in the shape where I can say nobody can beat me, so I’m working to get into that shape so I can feel more confident when I run.”

Bolt kicked off his European tour with a sluggish 10.04sec in Ostrava, the slowest time in his senior career, blamed on lack of sleep and the cold, blustery conditions.

But he rebounded with a 9.76sec in Rome last week to set himself up nicely for the Jamaican trials, never easy when the competition counts not only Powell but the likes of tyro Yohan Blake in its midst.

“I don’t send messages to people,” he chuckled after his victory on Thursday. “It’s always for the crowd who’ve come out to watch me run fast.

There was one complaint from Bolt, however, and that was with the starting blocks, which will be the same for all Diamond League meets and the Olympics, but not the Jamaican trials.

“The blocks have changed from last season. They’re new models. Personally I think they need to go back to the old blocks. I’m not very pleased with the new blocks they have, they’re a little short for me,” he said.

“I’ve been kind of guessing my steps because my foot is kind of big.

“I guessed in Rome and got it right, I guessed here and I didn’t get it that good so they need to go back to the old blocks so I can execute right.”

Bolt explained that the blocks were smaller than they usually were, and the plates where sprinters place their feet were “a little bit longer than usual”.

“I’m hoping there’re not the same blocks as we’re using here” for the London Olympics, he said, although Omega have already been confirmed as the official timekeepers in the British capital.

“Hopefully, they’ll change them or adjust them. I’m not too hot about them right now.”