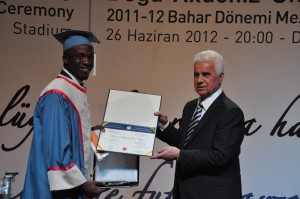 While Nigerians at home are still basking in the glory of excellent performances by their students abroad reported within the past couple of weeks, another Nigerian student in Turkey has given the country more reasons to be proud.

Tunji Anthony Olu-Taiwo from Ifako-Ijaiye Local government area of Lagos state has recently graduated from Eastern Mediterranean University in the Turkish republic of North Cyprus as the best graduating student from the Faculty of engineering.He finished with a Grade Point Average of 4.00 out of a possible 4.00 (straight A’s). He obtained a degree in Computer Engineering.

Tunji was born in Kano, Nigeria where he attended Air force Nursery and Primary school. He completed his secondary education at St. Thomas Secondary School in Kano.

Within the past two weeks, at least two other Nigerians have appeared in the news for similar reasons. Twenty-two year old Emmanuel Ohuabunwa was in the news for breaking academic record at the John Hopkins University in the United States. Shortly afterwards, another Nigerian, this time twenty-one year old Chibundu Onuzo was declared UK’s Number 1 black student as a result of her excellent academic performances and other exploits in creative writing.