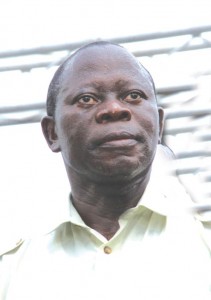 The Edo State Police Command has blamed unruly students of the Institute of Technology and Management, Usen, for Thursday’s armed attack on Governor Adams Oshiomhole’s convoy while the comrade on a campaign visit to the area.

Police say investigations into the incident have begun.

Oshiomhole was accosted by some students of the Edo State Institute of Management and Technology, Usen, who insisted that the governor must address them on issues bothering on their welfare.

Reports say that comrade Oshiomhole promised to address them after paying homage to the traditional ruler of the community. But in a sudden twist of event, the convoy of the governor on leaving the palace was said have met with angry youths who had barricaded the road, preventing the governor and his convoy from moving out of the community. It took the intervention of security agents, who shot into air to disperse the youths who haul objects at the convoy.

“After the campaign at about 6.15 pm, the governor decided to address the students on another day because it was already getting late.

“But the students barricaded the expressway on the outskirts of Usen in order to compel the governor to visit their institution.

“When their demands could not be met, they resorted to throwing stones and other missiles at the governor’s convoy.

“In the process of dispersing the riotous students, two of them were injured and are currently receiving treatment.

“Nobody was killed in the process. The students later regrouped and went to Usen Police outpost and vandalised the place.

“Investigation has commenced as the area is closely being monitored by the police.”

In a political twist, the commissioner of Information and Orientation, Louis Odion, had in a statement accused the Peoples Democratic Party(PDP) of ordering the attack on Oshiomhole.

But the PDP has swiftly denied any involvement in the attack.

“We understand that the students were on a peaceful protest during the governors visit to Usen, and the students came out to alert the governor of the state of affairs in the school when things got out of reach and information at my disposal has it that one of the students shot by Oshiomhole’s security men had died of gunshot injuries.” The state publicity secretary of the PDP, Matthew Urhoghide said, describing the allegation against the Party as false, baseless, unfounded and misconstrued to deceive the people of the state.