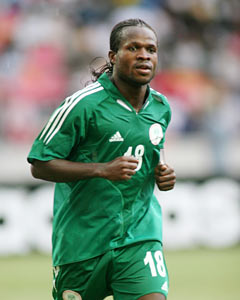 The Nigerian Police has vowed to rescue ex Eagles International and Lecce footballer, Christian Obodo from his abductors.

“We confirm that Obodo was kidnapped yesterday (Saturday) in Effurum (near Warri). We are making all diligent efforts to ensure that he is rescued unhurt,” Delta State police spokesman Charles Muka said.

“We are very hopeful that we will rescue him alive. We are working in combination with all other security agencies, including local vigilante groups and communities. We are combing everywhere.” He added.

The Delta State commissioner of police in the state, Ikechukwu Aduba, told NAN that Obodo should have informed his command that he was coming to spend some time in the state.

Aduba said that everyone knew the security situation in the country and the need for adequate protection but noted that Ogbodo did not let the police know that he was around.

“We provide security for foreigners in this country and in this state, particularly in Warri area. What will then stop us from providing security for our own people?

“But this young man came into the state without informing us. I was, therefore, embarrassed this morning, Saturday, when I heard of the incident,” he said.