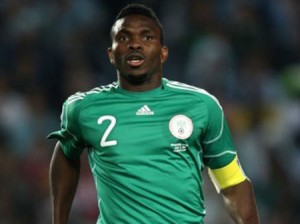 Nigeria skipper Joseph Yobo has predicted that the team will become one of the greatest teams in Africa soon.

“We only need a few experienced players to join this team and we will become the greatest national team in Africa,” declared Yobo, who missed the Namibia game because of injury.

“The mere fact that the team was able to get a win against Namibia after squandering several chances, should give Nigeria hope that this is a team for the future and sooner than later they will be scoring the number of goals that the fans want.”

Yobo has already fancied his chances of regaining fitness in time for a 2013 Africa Cup of Nations qualifier against Rwanda on June 17 in Calabar.

“For me, I’m praying that I should be ready for the game against Rwanda, I’m really missing my teammates on the pitch,” he revealed.

Yobo said his healing has been faster than the doctors at his Turkish club Fernabahceb had thought and he was confident he would be available for the game against Rwanda, who were held to a goalless draw in the first leg of the Nations Cup qualifier in Kigali.