The 43-year-old R&B star, Bobby Brown, was surrounded at the wedding  between him and his fiancée Alicia Etheredgeby, family and friends — including his older children Landon, 23, La’Princia, 22, and Bobby Jr., 19, as well as Brown and Etheredge’s only child together, Cassius, 3. Brown’s daughter with Whitney Houston, 19-year-old Bobbi Kristina, did not attend the wedding.
The couple got engaged in 2010 when Brown proposed to Etheredge during a New Edition show in Jacksonville, FL. Brown has credited Etheredge with giving him a new lease on life following his 2007 divorce from Whitney Houston, who died in February at age 48. 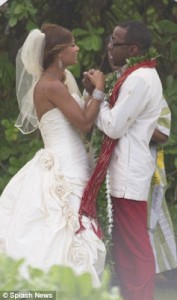