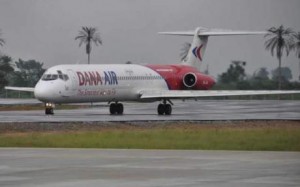 The management of DANA air has stated that the airline would incur a daily loss of N50million as a result of the federal government’s suspension of the airlines operational license.

DANA air Director of Flight Operations, Capt. Oscar Wilson, made this known at a joint press conference by the Dana Group and Airline Operators of Nigeria (AON).

It held as events continue to unfold after an MD 83 aircraft in the Dana fleet crashed into a residential area in Iju-Ishaga on the outskirts of Lagos.

All the 153 persons on board the aircraft which was heading for the Lagos airport from Abuja, died in the crash which also claimed the lives of some people on the ground.

Wilson said that the airline would be losing 2,000 passengers and N50 million daily due to the suspension of its operations in the wake of the crash.

According to him, the loss would amount to N1.5 billion in one month.

The Director reaffirmed that the airline’s insurer, Lloyds of London, was capable of paying the families of the crash victims N30,000 US dollars (N4.6 million) within the first 30 days of the accident.

Wilson appealed to commentators and the public to stop speculating in the media about the causes of the crash.

“There have been many speculations from aviation experts on the crash. They said that the aircraft lost its two engines but it is when the result of the investigations come out that we will know the true position of things,” he said.

The Secretary of AON, Capt Mohammed Joji, said that the purpose of accident investigation was not to punish people but to find a way to prevent a repeat of mistakes that could have caused mishaps.

He explained that aircraft were made and flown by man and the human error element in the cause of accidents was about 75 per cent.

Joji said that the airline business was capital intensive globally, and urged the Nigerian government to give concessions to airline operators and assist in bailing out those in difficult situations.

“The economy here is very good, that is why we have 24 foreign airlines operating in the country,” he said.