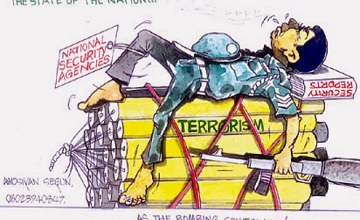 Inspired by the success of the amnesty program in the Niger Delta, the Nigerian govt has openly approached Boko Haram for dialogue. Govt intends to solve the boko haram menace the same way it solved MEND, i however  don’t think thats going to work beacause Boko Haram and the Niger Delta Mend are not one and the same.

The Movement for the Emancipation of the Niger Delta sought to expose the exploitation and oppression of the people of the Niger Delta and devastation of the natural environment by public – private partnerships between the federal government and corporations involved in the oil of the Niger Delta. Mend’s stated goals were to secure reparations from the fedral government for pollution caused by the oil industry. A goal the whole country sympathised with even though we did not support the blowing up of oil pipelines and the kidnapping of foreign nationals.

Boko haram also known as jama’atu ahlis sunna lidda’ awati wal-jihad which means “western education is sinful” is a jihadist terrorist organisation which aims to establish sharia law in the country. They have been known to attack christians and bomb churches. There is no way these guys are going to sit on a round table, hold hands and sing kumbaya with the federal govt. Their god father, the late Osama Bin Laden didn’t teach them to so.

Mend by their modus operandi never targeted innocent victims except for their violent clashes with security forces, and when they observed the sincerity of the federal govt to right the so many wrongs in their home land, the militants dutifully surrendered their weapons and worked together with government to provide a better future for the region and its inhabitants. Boko Haram on the other hand have suicide bombers who drive cars ladden with explosives into churches while christians are worshipping.  killing men, women and children. It’s now a sunday routine in Northern Nigeria.

Moreso activities of the violent islamic sect transcends beyond the Nigerian borders. A recent U.S report states that Boko Haram and two other groups; Al – shabaab in East Africa and Al – Qaeda in North Africa are not only sharing resources but indications are that they are also coperating in personel training. Basically Boko Haram is a member of an international terrorist syndicate and should be treated as such. How can you reason with such people?. These are guys whom Osama Bin Laden personally recognised and commended their efforts.

There is no way they would surrender their ideology. Boko haram is no movement seeking to salvage the North which is filled with a  largely uneducated populace and wild scale  poverty. It is rather a movement against humanity and freedom. Its members should be brought before the law to face trial for crimes against humanity.