For the first time in the history of Olympics, Saudi Arabia will allow its women to compete in the Olympics kicking off July. Officials say the olympics committee will overseer the participation of the qualified ones among them to compete in the events.

Saudi Arabia was one of three countries that did not allow women to participate in the games.
The other two are Qatar and Brunei and they are also going to allow their female athletes compete in the London games that will begin July 27.
Officials say they will compete, but they will be dressed to preserve their dignity. 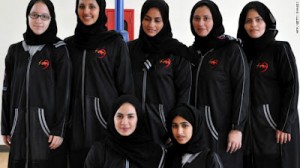