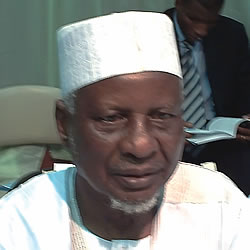 During the opening of a three-day retreat for Senators in Uyo, the Akwa-Ibom State capital, Senator David Mark was reported to have said that Nigeria may break up if the killings and destruction perpetrated by the Boko Haram sect were not checked.

In response to this, the veteran politician, Alhaji Tanko Yakasai, rebuked the Senate President, saying it is in fact such a statement that can break the country or instigate religious war. In his words: “for a man who is occupying the number three position in Nigeria, this is a reckless statement, ill-conceived, childish and immature. As a retired General in any country… one would have expected that there should be enough maturity from that person. There is a saying that a fool at 40 is a fool forever. If a man who has reached the age of 60 and above will speak like a fool…”

Alhaji Yakasai’s explanation: “The Boko Haram insurgency is only affecting 18 of the over 700 local government areas in Nigeria. I can say 700 are free from these disturbances”.